This week a member of my writers group sent me an image of a display of my books that had been set up in her school’s library (where she works). It was really wonderful to think that my books will be appreciated by some new readers.

In February I repeated my trick from last year, which was to write 250 words a day on weekdays and 500 a day on weekends. Somehow, I averaged over 650 words a day and wound up writing about 18.5 thousand words of my next book. I’m hoping to repeat the performance in March, but even if I only hit my original target, I’ll still be 30,000 words into the novel when I start my long service leave. That sounds good to me, and means I may (just may) have time not only to complete my first draft of the novel, but also make significant progress on my non-fiction project which has currently stalled. Maybe, I’ll have two books ready for release in 2020. That would be amazing. I only have one novel and about four short stories that I have ideas for and particularly want to write after these current projects, but I’ve previously been in the situation of having written all the stories I’d wanted to write and still found new inspiration to write more. So, I’m not worried I’ll run out of ideas any time soon. I’m heading back to uni (degree number 6!) in July, so we’ll have to see how things go.

I may be a little late, but I just found out that back in 2015 when I released Incite Insight, I made a bloggers list of notable Australian authored fiction for the year. Curiously, they had me in the horror section (it was a fantasy and horror list). Still chuffed to have been included. 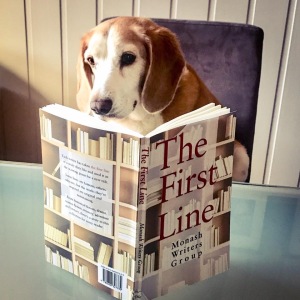 On the 20th of February it was my pleasure to launch the anthology, The First Line, which I wrote the foreword to, and contributed a short story, The Coat Hanger (also in Mug Punter). I chair the Monash Writers Group, whose anthology it was and helped publish it through Tale Publishing. The launch was well attended and it was great to get the 15 contributors together to celebrate having a story published. The launch was ably MC’d by Councillor Lynnette Saloumi from Monash City Council.

In November my latest book, Mug Punter was released. This was an experimental project for me. The book is only 48 pages long and contains three short stories. It’s intended to be something I can just give away or use to promote sales (ie: buy two books and I’ll throw this in), but it seems to be gaining a bit of life of it’s own as online sales keep trickling in.

In July my next full-length book, Colours of Death: Sergeant Thomas Casebook will be released. It’s a collection of nine short stories featuring the detective from Incite Insight, although, it should be stressed this is a stand-alone collection. The stories each feature a colour theme. I recently received the proof copy. It was great to finally hold the book in my hands. That feeling of having produced something never gets old.