This technique is the opposite of foot-in-door (see Compliance Techniques). Here you make an extreme request which you think will be turned down (ie door slammed in your face) and then a smaller request (the target). It is based on the idea of reciprocity. The reciprocity principle isn’t only for gift giving, it can also occur when you feel that someone has already compromised on what they wanted, and this compromise should be acknowledged with some behaviour. With door-in-face, people are more likely to accept the second request because they feel the person has already lowered their request/expectation to accommodate them and this puts the target person into their debt.* 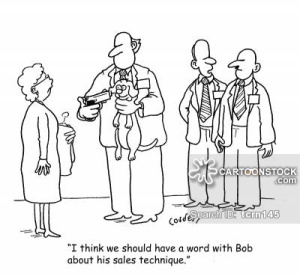 Deliberately underestimating a cost, price, rate etc or leaving out crucial information in order to get compliance. Essentially it means getting the commitment to do something before finding out information which may have altered your decision. Eg: Have you ever been asked: “Can you do me a favour?” without knowing what the favour is?

This is often used to sell things like cars. They advertise cars as being from a certain price, but then to get the better paint add $, extra safety add $, extra luxury add $, auto transmission add $ etc. Usually one or two of the add-ons will put you close to the model up in the range which for just a bit more gives you those extras you wanted and a whole lot more, so you might as well…

Like the other techniques discussed (see An odd way to increase and below) sales this has been demonstrated in research:

For authors using this technique can be as simple as asking someone to buy a copy of your book at a cheap price, for example $5, when they say yes, then add that is how much the second copy is (ie once you’ve paid full price for the first). Alternatively, get the commitment for $5 and say well to get it for $5 all you need to do is buy this other book for $20.

* I’ve experience this first hand when looking for someone to restore the roof of my home. They started by quoting a price which was nearly three times the two quotes we’d already received (thankfully). When we baulked at the price, they then ‘graciously’ brought the price down by ten percent. After a few such price drops (including the obligatory call to a manager for approval, getting us to agree to put a sign up advertising them for one month) they brought the price down about 35% of their original price. We politely said we were not willing to pay that much and the person left (after repeating each price drop he’d made directly implying we owed him for being so considerate). The following week we had a call from their head office offering an even further discount if we agreed to keep their sign for an additional two months and paid a deposit over the phone then and there. This absolutely final, best offer price was still a lot more than the other prices we’d been quoted ($6k vs $4 and $3.5), so we said no. I couldn’t help but think how many people would jump at that offer though, especially if you hadn’t got more than one quote.

Another time, a tree removal place tried the same tactic with me. I laughed as I knew what they were doing, and took over the negotiation by offering a really low price, which was refused, then slowly raised my offer. When they mentioned how much they’d come down in price, I mentioned how much I’d come up. The poor person was terribly confused. They were a laborer and not a salesperson and probably had been told offer price x then price y, but without really understanding sales technique. Eventually we agreed on a price we were both happy with.