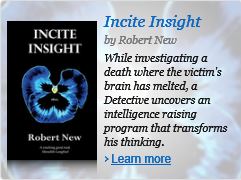 Image from an early promotion

When I published Incite Insight roughly three and a half years ago, I said I wanted to sell a thousand copies. I was laughed at, more than once, right to my face. I was naïve about what it took to sell books, especially at that quantity, but that number wasn’t randomly chosen.

I wanted people to read the book, and thought that, with some luck, I could sell 200 paperbacks and 800 e-books. The e-book number came from what Bookbub indicated they’d be likely to sell if I landed a promotion with them, which I, once again naively, thought I could. I’ve applied to them a couple of times, without success. I also thought that since I had a distributor on board through Tale Pubishing, sales would just happen.

So that meant using e-book promotion sites (which use email lists & social media to promote your book to readers), and I’ve used many of them with variable success. By stacking several promotional services together, in conjunction with a discount on the book to 99c, I’ve had campaigns sell between 37 and 92 books. My previous campaign (in Dec/Jan) sold 77 copies and I was sure that with the number of services I had stacked for a promotion last week, I’d reach the 55 sales I needed to break the 1000 barrier. I spent a lot more money than usual, and was hoping I’d not only break the 1000 mark, but maybe have my most successful promotion yet.

Unfortunately, after the sale finished on Friday, I was left on 999 sales (and with a couple of promotion services crossed off my recommended list).

I made an appeal on the final day of the promotion to my social media followers to buy the book while it was discounted, and be my thousandth sale. In exchange, I’d promote them in my blog (the version of this post I was intending to write).

Sunday was my birthday. Maybe someone would buy a copy?

This morning I did my usual check and saw I’d made a new sale overnight (actually on my birthday. I’m Australian, so it whilst it was the 8th here, it was still the 7th in the US where the sale occurred). My thousandth sale. Goal achieved.

For what it’s worth that’s made up of 207 paperbacks and the rest as e-books; pretty much what I’d envisioned when I launched the book.

I’ll give a breakdown of sales/channels in a future post. I’ve also given away over 1600 e-books of Incite Insight during a ‘free’ promo. I know many authors would scoff at those numbers, but, to me, the thought that there are over two and a half thousand copies ‘out there’ is very satisfying.

Mug Punter has past 50 sales too. This was an experimental/promotional book (only 46 pages), and 50 was my target for it. Nearly all of those are paperbacks rather e-books, which shows the intent behind it was reasonable.

I also recently sold my 250th copy of Movemind. I’ve never set a sales goal for that title, but I’m really happy with that number. It’s also had nearly 700 free e-books given away too. So soon that will have a thousand copies in circulation.

In a ‘writers bucket list’ milestone, two people I’ve spoken to this year have said they’ve seen my books in their local bookshop and they were excited to make the connection between the books they’d seen and me. Still on my list is being recognised by a stranger as an author they’ve read (and, ideally, enjoyed). That will be quite a milestone.

One thought on “Milestones”